A pair of WA Masters hockey players sprung into action recently and were able to save the life of their teammate and captain recently when he collapsed without any vital signs at the recent Hockey Australia Men’s Masters Championships.

Western Australia’s 60s division two captain David Tonkin was walking back onto the field after the halftime break of his side’s match against Queensland at the Championships on the Gold Coast when he fell to the floor and showed no signs of life.

Fortunately for Tonkin, his teammates Dr David Mountain and Professor Michael Henderson were well-versed in emergency situations and knew exactly what to do.

Board Director of Eyewall Foundation, Professor Henderson is also the founder of the global acute trauma business Emergency Triage Services, while Associate Professor Dr Mountain is its CMO and a fellow of the Australian College of Emergency Medicine (FACEM).

The pair sprung into action to save Tonkin’s life, with Mountain giving cardiac compressions and Henderson giving mouth-to-mouth on the pitch on the Gold Coast to save their teammate’s life.

“Just as we were breaking out to walk back onto the field for the second half of the game he keeled over,” Professor Henderson said.

“Dave dived in and started doing a cardiac massage, but earlier in the day he had been hit in the face and lip which I realised would make it hard for him to do mouth-to-mouth, so I jumped in and started thisat.

“Within half an hour he was on his way to a major hospital – which was five minutes away from the turfs.

“The result was an amazing result given we had our captain back.”

Tonkin is now recovering from Bypass Surgery in athe Brisbane Gold Coast Hospital and Professor Henderson said he was in “fantastic spirits”.

Professor Henderson said credit for the life-saving mission should not go solely to himself as it was a joint outcome.

“I take the credit for the Royal Life Saving Society and St John Ambulance who run these programs and refreshers for CPR,” Professor Henderson said.

“If it had not been for these amazing not-for-profit organisations, I would have been floating around.

“Dave wouldn’t have been with his expert trauma background, but it was certainly handy to have another person able to assist under the circumstances.”

Professor Henderson is a former Hockey WA president and was appointed in August as the inaugural Chair of the global World Masters Hockey Medical Advisory Committee for a four-year term.

His company Emergency Triage Services have been a prominent sponsor of Hockey WA.

He said the dramatic rescue on the Gold Coast stressed the importance for all Masters hockey players to focus on preventative maintenance and effective medical screening.

“Hockey is quite a unique game that is played into much later years than many other sports,” Professor Henderson said.

“The big issue for us here is as as many of us start to age, we still have the skills, but don’t acknowledge we deteriorate physically.

“We need to make sure we protect all our players so we don’t have situations like this in the future.

“It is important to start thinking about preventative maintenance now.”

Professor Henderson urged all Masters players to have regular health check-ups, lift their body weight as well as aerobic exercises and to train themselves and their families in first aid.

“It is really important to make sure you have a full physical each year, including regular stress electrocardiography ECG’s,” he said.

“I think the more of us that get into a gym in our later years, the less likely we are to have injuries.

“To be able to do the refresher courses with Royal Life Saving Society and St John Ambulance is critical for every family.”

Henderson is a Professorial Fellow, the University of Western Australia, Faculty of Medicine, Dentistry & Health Sciences. 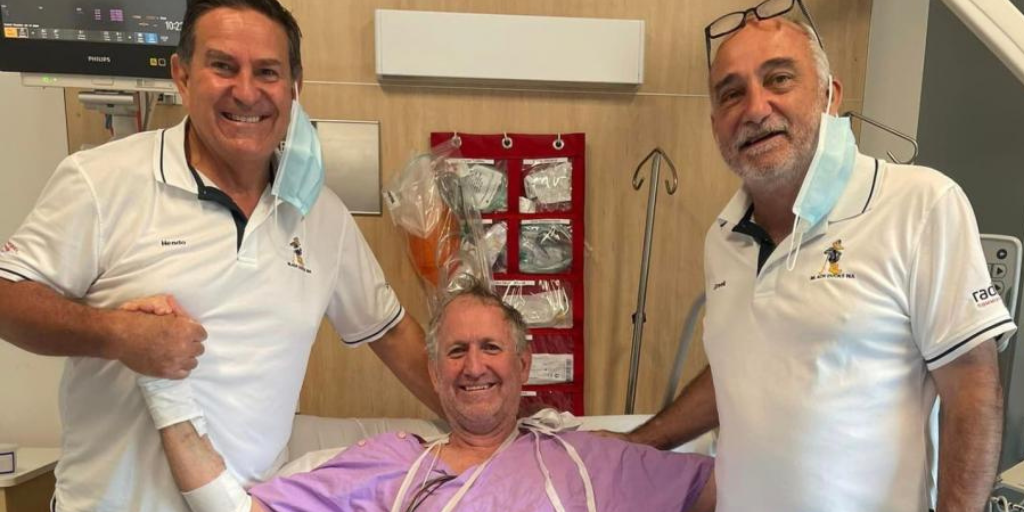 The research we’re funding is undertaken in Western Australia and by a global network of medical practitioners. Take a look.

What we’re trying to achieve.

We’re a young foundation with big dreams. Our funding is aimed at a number of critical areas of vmedical research.

The research we’re funding is undertaken in Western Australia and by a global network of medical practitioners. Take a look.